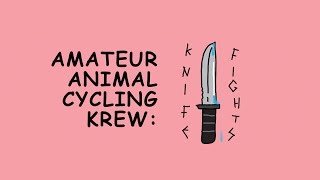 In light of recent events at this year’s Tulsa Tough Category 3 race, we would like to issue the following statement.

Hello, my name is Daniel Pasley. Sitting next to me is Patrick Newell. In light of recent events at this year’s Tulsa Tough Category 3 race, we would like to issue the following statement:

Six months ago Patrick Newell , Chris DuRoy and I decided to start a training and racing blog in service to the idea of Animal Spirit. It quickly became evident that we had wildly different opinions about science, technology, history and facts. It seemed natural then to solve the issue of who was right through competition. We are racers. And our blog is about training and racing. I t was decided then that each of us would go our separate ways, follow our own advice, train for a period of time, and finally race against each other—thus proving the validity of the winner ’ s training technique.

Racing against each other presented a number of logistical problems based on where we all live and and our current racing categories. B ecause Chris DuRoy was a licensed Cat 3 living in Oklahoma . Because Patrick who had not been rac ed competitively in several years and was therefore interested in downgrading from a Cat 2 to a Cat 3. Because I was interested in upgrading from a Cat 4 to a Cat 3. And finally, because Tulsa Tough is arguably the greatest Crit Race in America if not the world , w e decided to race in the Cat 3 race at the 2017 Tulsa Tough. Knowing that the race would sell out quickly (this was in January) we contacted two casual acquaintances, Brad and Tony , who lived in Oklahoma and who had valid Cat 3 licenses but did not intend to race. We asked them if we could register using their licenses provided we transferred ownership of the registrations into our own names prior to the race. Both said yes provided we did in fact do that. In spite of our best intentions we failed to do so. While it’s tempting to offer a more thorough and detailed explanation, we won’t. The b ottom line is that we failed. We put Brad and Tony in a precarious position and have since embroiled them in a tedious and problematic controversy. For that we are very sorry. But to be clear, we did not steal their identities. And our plan, while tenuous and mildly impractical, was legal and reasonable. We just didn’t do it right.

Meanwhile in the lead up to the race, because we were preoccupied with racing against each other rather than trying to compete in the classic sense (strategy, tactics, podium finishes, etc), we invented Knife Fights. Knife Fights are a race inside the race, the outcome of which is determined by whoever animates the race most.

With the Knife Fight concept in mind, and because the crowds at Tulsa were sooooo large, electric and contagious, Patrick got swept up in the moment and and forgot what he was there to do: animate the race, not win the race. As soon as the race was over Patrick understood that he had gone too far. With this in mind and given our stated goals, Patrick had no intention of collecting the prize money and/or standing on the podium.

Patrick was never required to drug test. Tony’s name was never called. Patrick has had several conversations with USAC in the days since Tulsa and the issue of drug testing has never come up. We have also contacted USADA and they confirm absolutely and unequivocally that a drug test was never requested. The story about dodging a test is erroneous.

As I mentioned since the race, Patrick has spoken with USAC officials at great length and on a number of occasions. It’s our understanding that as far as they are concerned the matter is concluded. To be clear, in his conversations with USAC Patrick explained his plan to formally downgrade from a 2 to a 3.

Our results have been removed from the record and the standings have been adjusted. We’ve also issued a formal written apology to everyone involved with the Cat 3 race. We’d like to take this moment to reiterate how sincerely sorry we are to those racers who otherwise would have had an opportunity to podium. And to the USAC officials for wasting their time and for compromising the integrity of the race. And to Malcolm and Tim, Tulsa Tough Race Directors, for turning their race into a scandal and a circus. We love this race. In all of this that’s the ultimate irony for us. We chose your race because it is so remarkable. Where better than Tulsa Tough to feature a showdown and showcase the lost art of Animal Spirit? In the future we hope that we can contribute to the race in a positive, meaningful and practical fashion.

With that in mind I’d like to conclude with a few thoughts. For the last five-plus years Manual for Speed has existed to promote, highlight and showcase what we believe to the be the greatest sport in the world. We’ve covered countless races from the Tour de France and the Spring Classics to Speed Week. We’ve published Fan Club Interviews, Human Athlete Visual Showcases and MFS Cribs along with other features unique to our perspective. We’ve featured both individual athletes and entire organizations. We sponsored and helped to promote a women’s team called LA SWEAT. And yes, we have a particular Point of View. One that’s not for everyone. As such, we welcome criticism about our style and aesthetic approach. Maybe you’re not into it. And that’s fine, that’s to be expected, it’s not for everybody. And yes we’ve made mistakes, sometimes super stupid ones but we are not villains and bigots. We approach this project with the best of intentions, we value integrity, and we believe that we’ve made a positive and substantial contribution to the sport. Unfortunately in this particular instance our execution was sloppy and disruptive.

We made a mistake and we should be held accountable for our actions, we should get in trouble and we have gotten in trouble. We should be sorry and we are sorry.