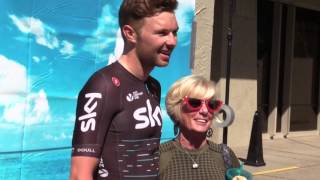 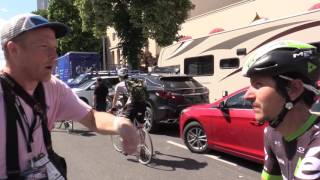 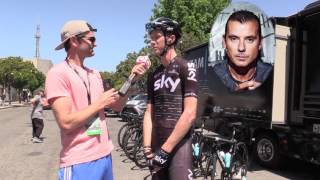 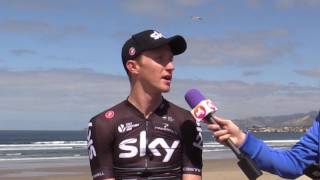 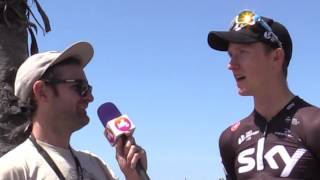 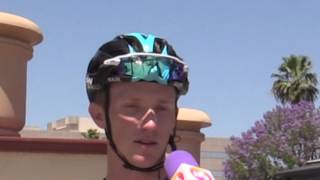 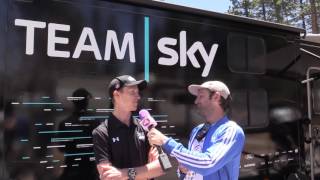 Quality Inn Santa Barbara: So far, this is the smallest room on the trip. It’s tight—one could even say crowded—in comparison to our palace in Modesto. But the outside, the exterior, is so much nicer than the exterior of Modesto. Whereas Modesto was a vast expanse of tan and manure, here in Santa Barbara the door of our shack opens to the American Riviera where the mountains plunge into the sea, palm trees abound and facsimiles of Spanish architectural motifs are as invasive as scotch broom–as disparaging as this sounds, the vibe one gets from the ubiquity of the terracotta roofs and whitewashed walls is extremely pleasant. So really, our hotel room could be an overfull port-a-potty and we’d probably be happy.

Interview Ian Boswell. Ok, so today we needed to discuss hunting, which we did, which was great.

Decide on how to watch the race. Again, this is one of those ones that happens before every stage of every race we attend, but today’s race presented a special problem because it was going to be especially tedious from a photographer/man-on-the-street/combat journalist POV. Don’t get me wrong, I am sure that on the TV or the streams there was much ado: Ligget spewing trivial anecdotes and improvising the pronunciation of names from across the globe, helicopter shots of a two hundred foot line of cyclists trudging down the coast, and so on and so forth. There’s something to that; good or bad, there’s at least some meat to bite into. But for us grunts on the ground, we were looking at slim picking. Do we just shoot the start and head to Santa Barbara? Or do we shoot the start, enjoy a donut, then head back to San Luis Obispo to catch the sprint? Going to the finish was out of the question. Sorry. If we did the latter we’d be able to pick up a few more pics for our fans and maybe add to our story. The former and we’d be in Santa Barbara eating tacos before the clock struck three. In the end, we decided to head to San Luis Obispo. Did it make our day longer? You bet, but we love our fans and we know you love us and because our affection for each other is based on an economy that is in a large part based on our ability to produce Professional Road Racing images and insights, and because we’re addicted to your affection, we decided to risk a long day in San Luis Obispo. We did it for you, we did it for us. We did it for love.
I didn’t know it at the time, but it turns out that I was predestined to buy a set of Apple AirPods today… and bought them I did. Have I set them up yet? Not yet. But I plan on doing a run in the morning and I plan on listening to some music or maybe a podcast, I dunno. Either way, I plan on doing that shit wireless.

See my two-plus-year-old niece and my brother. I did. I know the race was way cool. But honestly this way SO much cooler. You get it. I know you do.

WIFI Details I am streaming the new Chance track and Frank’s new track while uploading a video where Ian Boswell talks to us about hunting. Congrats America. Congrats Quality Inn SB. Congrats, Future (not the artist, but the coming time.

Weather The sun was out all day. Which was SO nice. When that vitamin D is raining down on you like it did today, well then your fortune is nothing less than outrageous.

"Lachlan, what do you think of that Best Young Rider’s Jersey? I believe it was designed by Banksy."

These logos are insanely low-res, sorry, but come on. So good.