2016 Spring Classics
WITH SUPPORT BY 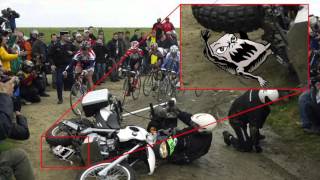 Interview
Phil Gaimon: Cobble Goblins Edition It was 2013 and we only had one friend in the Pro Peloton, but then we met Phil
Apr 14, 2016

I watched a GoPro video of Paris-Roubaix highlights today. It was probably the same one that GoProBro worked on (yikes!). Anyway, it was really really really good. I hate myself for saying that. I’m not sure why, maybe because GoPros are like the rollerblading of photography and the wakeboarding of videography all at once. Which is crazy because videography is already the kitesurfing of photography. Which, really, if I’m being honest, what’s even more insane to think about is, photography is the mountain boarding of writing.

Anyway, I liked how well it was edited, and I liked how seamlessly and effortlessly, and convincingly, it immerses the viewer inside the race. Speaking of being in the race, Manual for Speed is never in the race. We’re at the race. That’s our POV, that’s always been our POV, it’s a good POV, we like it, this POV of ours. The curious thing about it—and maybe this is irony, maybe not, though it’s certainly counterintuitive at first glance, that’s for sure—is that we never know what’s happening in the race, despite being at the race. In countries where the race is covered live on the radio, and with a Raoul in the car to translate, you can follow along that way. Or on your phone, though that’s usually cost-prohibitive and even if it wasn’t, it requires a signal. So yeah, for hours and hours we know nothing. I mean, you get a sense of it when the race comes past, but that’s all you get, a sense. And we talk to people, other photographers, soigneurs, fans with transmitter radios, randos, whatever, it’s no big deal.

The best way to SEE the race for the race’s sake is at home. That is undeniable. Everybody agrees with this statement. If you want to see it unfold, if you want to see the various decisive moments, the crashes, the moves, if you want to see just how far out the break is (and watch it get reeled-in just in time, every time, except when it doesn’t, which is like a glitch in the Matrix), stay at home, watch on a TV. It’s better. To be at a race is to be in a bubble of time. In the morning, on the way to the start, invariably, we talk about how many times we’re going to see the race. The start, the finish, plus how many times?, at least one, never more than six or seven. And that’s fine, that’s our POV.

Apparently Paris-Roubaix was amazing but I didn’t know that until I got home that night. I mean, it wasA STUNNING AND HEROIC FEAT FOR HOURS ON END that day. And I was there, I could see it, I saw it.

The spectacle, the knife fight, the high-speed death march, it was all right there at my feet, like, RIGHT AT MY FEET, I just didn’t know (in real time) if it was technically and textbook-ly a remarkable bike race. Amstel Gold, I’m told, was boring and lite-disappointing; but again, I didn’t see that, I saw an incredible high-speed spectacle.”- MFSLike anything else it just comes down to perspective and point of view. Here is a short list of things that happened at Amstel Gold that were NOT televised. Things for which there is no GoPro Footy. I hope.

The Base of Lange Raarberg aka “Long Strange Climb”, 19.7km